If you used the Internet in the ’90s, you probably remember GeoCities. This popular web-hosting service was active in the U.S. from 1994-09 (and until 2019 in Japan). It hosted tens of millions of personal websites at its peak.

In the mid-1990s, the World Wide Web (as it was called at the time) was a new frontier. Ordinary people could publish any kind of information—no matter how niche—for worldwide consumption.

However, it took some fairly beefy computer servers to handle web server software at that time. And those servers required expensive, speedy network connections, so website hosting was costly at first. A customer would pay a monthly fee (like $10) to rent a few megabytes of space on a remote web server—or they might get some web space with an ISP subscription.

Web publishing was primitive back then. To publish a site, you’d typically edit an HTML file in a text editor, and then upload it (along with some images) to the web server via an FTP client and a lot of patience. 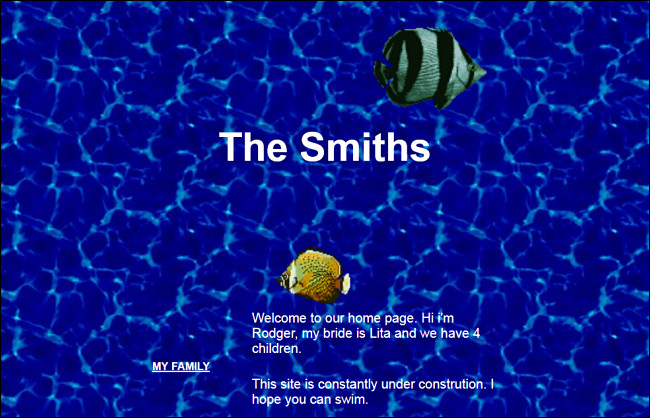 In 1995, GeoCities proposed an alternative plan to paid hosting. It would provide a small amount of web space for free (about 2 megabytes at first), and then charge a monthly fee if you wanted more storage space.

Around 1997, GeoCities began to offset its costs by requiring its customers to display advertisements on the pages they hosted. Along with Tripod, GeoCities became a huge step in the democratization of the Internet, allowing anyone with an Internet connection to easily publish info on the web.

A Social Neighborhood on the Web

Since GeoCities websites were created by people from every walk of life, each site had its own folksy feel that reflected the personality of the author. In that way, it presaged the later appeal of social networking sites, like Myspace and Facebook.

While personalizing their sites, GeoCities members would bedeck their pages with banners promoting personal causes, ads for their favorite software (like the Netscape web browser), holiday-themed animated GIFs, images from their favorite TV shows, and more.

From the start, websites on GeoCities were organized into virtual “neighborhoods” that loosely reflected a theme, such as “Hollywood” for entertainment, “Area51” for science fiction, and “SiliconValley” for computers.

The neighborhood appeared in the URL of your site, which also included a unique numerical address, such as:

By the late 1990s, GeoCities’ popularity exploded, and it became the third most visited site on the web. Over time, the number of neighborhoods on GeoCities expanded dramatically. By the early 2000s, GeoCities hosted web pages on just about every topic imaginable.

We’ve selected a few vintage GeoCities websites to share, which have been archived for posterity by oocities.org. The following images were captured in a modern web browser, though, so they might not look exactly how they did in their heyday.

Still, you’ll still get an idea of what classic layouts and graphics looked like on the web in the late ’90s through the early ’00s. The End of GeoCities

In 1999, then-internet giant Yahoo purchased GeoCities for $3.5 billion. The GeoCities service then began to change its structure, although many of its legacy pages remained. GeoCities remained fairly popular with people new to the web into the early ’00s.

However, its popularity began to decline as web hosting became cheaper and was more often included with ISP plans or inexpensive Mac.com accounts. The rise of social media sites, like Myspace also contributed to its demise.

In 2009, Yahoo announced it would be shutting down GeoCities, prompting an outcry among digital preservationists about the massive loss of cultural history that would be. A volunteer Archive Team started capturing as many GeoCities pages as possible before Yahoo pulled the plug.

They archived about 100,000 sites, and you can view most of them today on mirror sites, like oocities.org.

How to View GeoCities Today

Despite the sites that were lost when Yahoo shut down GeoCities, the oocities archive is a priceless, historic time capsule of late ’90s to early ’00s internet culture, and we’re lucky to have it. It’s clear that GeoCities provided an essential outlet for personal expression—and that’s timeless.

Tech stocks lead losses as US indices pull back from rally

Tech stocks lead losses as US indices pull back from rally

Ive tested Amazons entry-level Kindle for a year, and its the best e-reader for less than $100