Tablets offer a nice middle ground between a smartphone and a laptop, and many people love them for that. And when it comes to picking out an upgrade for a tablet user, you want to make sure you’re choosing correctly, so we sought out the best tablets available today to help you do just that.

What to Look for in a Tablet

There are a few things to consider when selecting the right tablet.

Best for Most People: An iPad

The iPad line is what most people first turn to when considering a tablet, and for good reason. Not only is iPadOS arguably the best tablet OS out there, but the line also covers multiple price ranges, use cases, and all the tablets in the line are high quality. It’s for that reason we can’t just recommend one iPad—we have to recommend three.

Android tablets can be hit or miss, but the Galaxy Tab S7 has proven itself a hit. While there isn’t much competition for Samsung in the high-end Android tablets arena, this is definitely the best Android tablet you can buy today.

Besides that, the S7 just offers a great tablet experience with solid performance and all the modern features you’d expect like fingerprint scanning and fast-charging.  The tablet comes with Samsung’s S Pen, which is an advanced stylus that’s great for drawing, handwriting, and general menu navigation. It even connects to the back of the S7 for easy charging and storage.

Overall this is one of the best dedicated Android tablets we’ve seen in a while, and for avid Android users, it’s definitely the tablet to buy. The normal S7’s screen measures at 11 inches, but if you want to go a step further, the Galaxy Tab S7+ offers a 12.4-inch display that also displays colors more vividly.

For Windows Fans: The Surface Line

Microsoft’s Surface line has always been well-known for its 2-in-1s—laptops that can easily switch into a more tablet-like form factor. But over time, these devices have only walked the line towards being full-on tablets more and more, and these are the two worth considering as tablets this holiday season.

We fell in love with the Ideapad Duet while reviewing it, and the reasons are pretty straightforward: This tablet offers an insane value. This 2-in-1 Chromebook can act as both a standard laptop and a tablet, thanks to its easy-to-remove keyboard. The performance is phenomenal, and the battery life outpaces other ChromeOS devices as well. The screen measures at 10.1 inches, so it’s not bothersome to take out of the house.

While ChromeOS still isn’t ideal for tablets yet, it’s enough to be functional. And the support for various (but not all) Android apps only takes it a step further. It’s hard to find a better overall package for the price on ChromeOS, and for that reason, it gets our pick as the best of the best.

For a lot of people, a tablet is a simple gateway to streaming or reading apps, and in that case, you don’t need some of the more high-end options already presented. The Fire HD 8 doesn’t impress with cool features or powerful hardware, but rather, it’s an inexpensive tablet that specializes in entertainment. And at the price, that’s more than fine—great even. Having an option on the lower-end like this is great to see, and as long as the user isn’t looking for the hottest tablet on the market, they’ll likely be very happy with their new tablet.

If you want to take a step up, then the Fire HD 8 Plus has an extra gigabyte of RAM and introduces wireless charging (charging dock increases the price by about $30). The screen on both is the same size though at eight inches.

Users looking for a larger tablet may prefer the 10.1-inch Fire HD 10, while the Fire 7 presents a bargain-bin price that still offers a lot of bang for the buck.

Best on a Budget 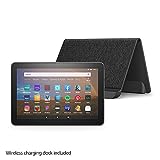 The explosive problem of zombie batteries

How the rAInbow AI chatbot is tackling domestic abuse

The explosive problem of zombie batteries

How the rAInbow AI chatbot is tackling domestic abuse